Theresa May Finally Faces Her Moment of Truth on Brexit

This could be a deadly month for Theresa May… Unpopular at home and in Brussels, the British leader will try to restore order with a Cabinet lock-in at her country estate that’s been dubbed the body bag summit. 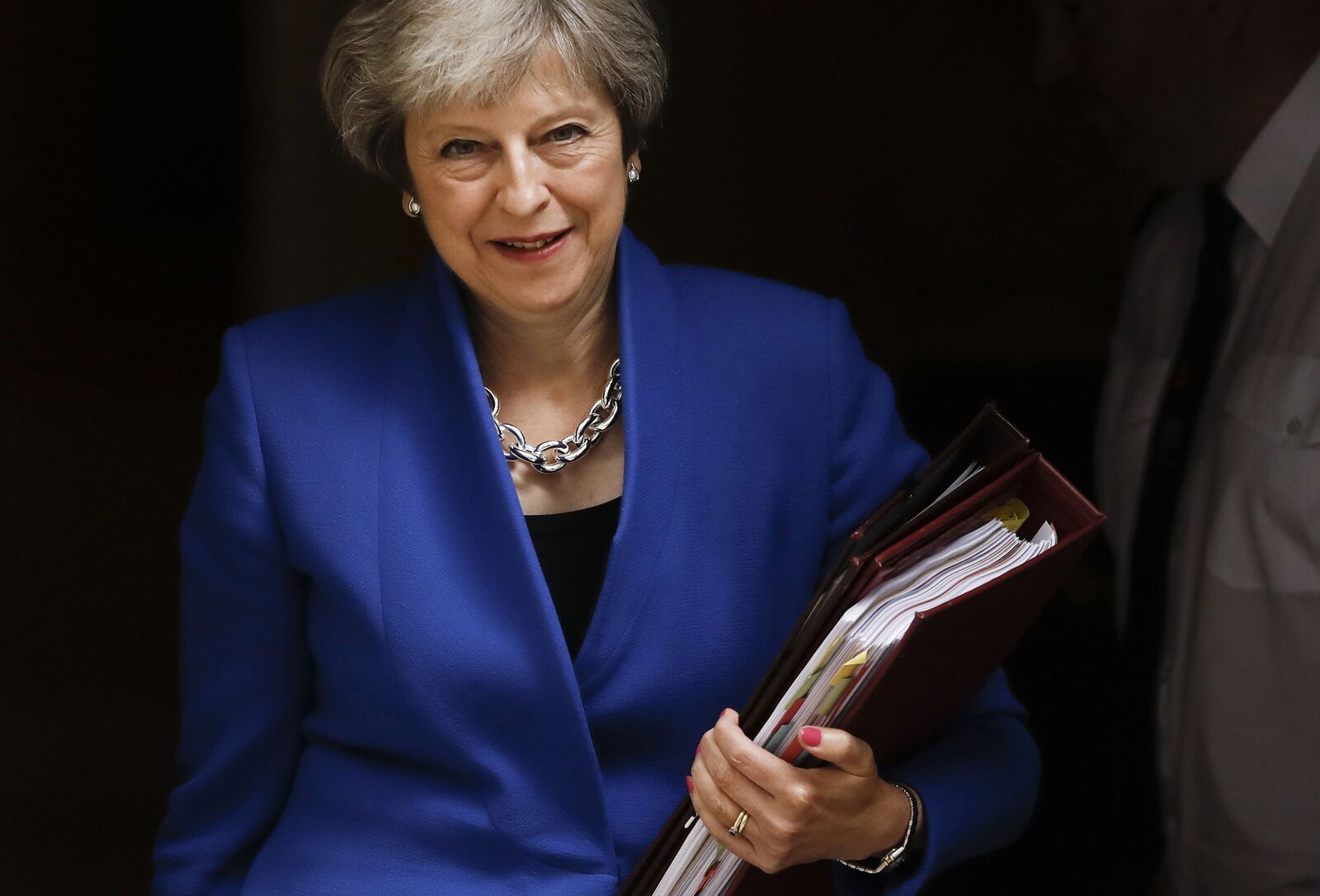 May’s aim is to force a decision on how dramatic a split to seek from the European Union. Businesses want the smoothest of breakups, but if May tries to stay close to the bloc, she’ll face accusations of betrayal by Brexit purists. Will she face down the hardliners in her party? Or find another fudge?

May’s Conservatives aren’t the only ones at war. The opposition Labour Party is battling its own Brexit demons with growing calls for a second referendum.

Back the prime minister or resign. Those are options facing top ministers as they head into Friday’s gathering at Chequers in Buckinghamshire, northwest of London, with the goal of uniting behind an approach to Brexit even as rivals are reported to be lining up.

Details of the talks are set to be published the following week, and the idea is that clarity will finally emerge in a so-called white paper that will set out the U.K.’s goals for its post-Brexit relationship with the bloc.

In which a minister rips up a report in fury

The scale of the challenge facing May is clear. Media reports abound of tempers running high, with Environment Secretary Michael Gove said to have ripped up a government report on future customs options because he felt his concerns had been downplayed.

Hardline Brexit supporters like Gove oppose May’s preferred option, which involves the U.K. collecting tariffs on the EU’s behalf, and instead back an alternative that would see technology — which doesn’t yet exist — providing the key to minimal border checks. A government official on Monday confirmed a BBC report that a third option is now on the table. The official provided no details on the new proposal, which hasn’t been made public.

This particular argument has been dragging on for months, with concerned businesses finally sounding the alarm.

Significantly, all 29 ministers who attend Cabinet will be present at the meeting, and a clear majority of them voted Remain in the 2016 referendum. The question is whether May will use that to push through a version of Brexit deemed too soft for some.

If Tories want to get rid of May, this is how they would do it

The prime minister is walking a tightrope as the white paper also needs to win over pro-EU Tories threatening to defeat the government by backing an amendment to the Trade Bill that would keep Britain in a customs union with the EU after Brexit.

“May’s instincts will be to keep everyone on board,” Mujtaba Rahman of Eurasia Group wrote in a note. “While that would not ease the EU’s growing exasperation, it would have the advantage of giving the government some crucial wriggle room when negotiations reach their crunch point this autumn.”

Everyone’s had enough of waiting

Tory divisions over Brexit are testing the patience of EU leaders and raising the risk that Britain crashes out of the bloc without a deal, the scenario most feared by businesses.

None of the leaders May addressed over dinner at a summit last week were very impressed with what she had to say. Belgian Prime Minister Charles Michel put it best: “The feeling that dominates is the impression that the British continue to negotiate with the British and not with the EU.”

Even the NHS is preparing for the worst

With nine months remaining before Britain leaves the EU, discussions on a future trade deal have yet to get under way. There’s also no agreement on how to avoid a hard border between Ireland and Northern Ireland.

Businesses and government departments have long been preparing for all Brexit eventualities — and so is the National Health Service.

NHS England Chief Executive Simon Stevens said significant planning is taking place to ensure that the supply of vital medicines and equipment continues in “any Brexit scenario.” The comments are significant because reports of doomsday planning by the NHS have been dismissed by the government.

Labour is divided over Brexit too

May has one advantage in her battles over Brexit: the opposition Labour Party is split down the middle too.

Dozens of Labour lawmakers defied leader Jeremy Corbyn in a vote last month by backing an amendment calling for membership of the European Economic Area, which would let Britain participate in the single market but mean accepting free movement of people.

And the pressure on Corbyn may be set to intensify this week as the Unite labor union, Labour’s biggest financial backer, holds its annual conference. A YouGov Plc poll published ahead of the gathering found most members support giving the public a vote on any Brexit deal May brings back from Brussels — a position at odds with that of the Labour leadership.

Corbyn said on Sky that …

Полную версию статьи читайте на сайте Bloomberg
или у нас на занятиях
BloombergанглийскийБританияПолитика
Заказать звонок
+
Жду звонка!
Privacy Settings
We use cookies to enhance your experience while using our website. If you are using our Services via a browser you can restrict, block or remove cookies through your web browser settings. We also use content and scripts from third parties that may use tracking technologies. You can selectively provide your consent below to allow such third party embeds. For complete information about the cookies we use, data we collect and how we process them, please check our Privacy Policy
Youtube
Consent to display content from Youtube
Vimeo
Consent to display content from Vimeo
Google Maps
Consent to display content from Google
Save