Apple Worries It Will Be Collateral Damage

Apple’s chief executive, Timothy D. Cook, may be the leader of … the world’s most valuable public company, but lately he has had to act a lot like the tech industry’s top diplomat. Last month he visited the Oval Office to warn President Trump that tough talk on China could threaten Apple’s position in the country. In March, at a major summit meeting in Beijing, he called for “calmer heads” to prevail between the world’s two most powerful countries. 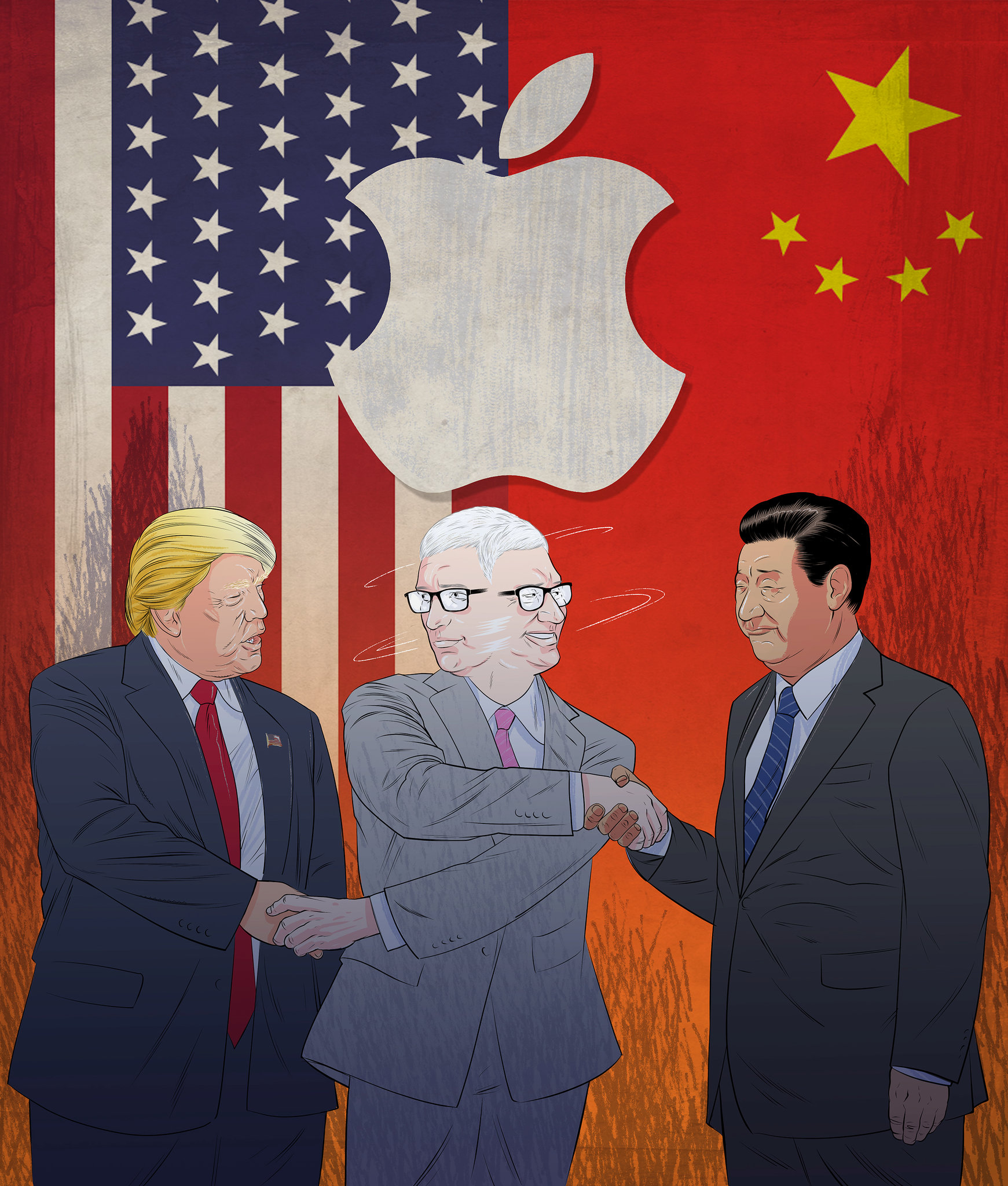 In a trade and technology showdown between the United States and China, Apple and Mr. Cook have a lot to lose. With 41 stores and hundreds of millions of iPhones sold in the country, there is arguably no American company in China as successful, as high-profile and with as big a target on its back.

Since he took over Apple from its co-founder Steve Jobs, in 2011, questions about whether Mr. Cook, 57, could recreate the magic that led to the iPod and iPhone have persisted. For Mr. Cook, the analogous breakthrough — and potentially his legacy as the heir to Mr. Jobs — has come not from a gadget, but from a geography: China.

Under Mr. Cook’s leadership, Apple’s business in China grew from a fledgling success to an empire with annual revenues of around $50 billion — just a bit under a quarter of what the company takes in worldwide. He did this while China was tightening internet controls and shutting out other American tech giants.

Now, with the Trump administration saying on Monday that it will identify another $200 billion worth of Chinese goods that could face tariffs on top of the $50 billion already planned, and China having threatened retaliation, Apple is stuck in the middle.

The Trump administration has told Mr. Cook that it would not place tariffs on iPhones, which are assembled in China, according to a person familiar with the talks who declined to speak on the record for fear of upsetting negotiations. But Apple is worried China will retaliate in ways that hamstring its business, according to three people close to Apple who declined to be named because they were not authorized to speak publicly.

Apple fears “the Chinese-bureaucracy machine is going to kick in,” meaning the Chinese government could cause delays in its supply chain and increase scrutiny of its products under the guise of national-security concerns, according to one person close to the company. Apple has faced such retaliation before, another person said, and Reuters reported Ford vehicles are already facing delays at Chinese ports.

There is also concern that Apple could face reprisals for legal and regulatory efforts in Washington that have made it difficult for the Chinese tech giant Huawei to sell its phones and telecom equipment in the United States.

Apple executives and lobbyists in Beijing and Washington, led by Mr. Cook, have been trying to work both sides. They have fostered close ties to the administration of the country’s leader, Xi Jinping, an effort called Red Apple by employees at Apple’s manufacturing partner Foxconn, after the official color of the Chinese Communist Party. 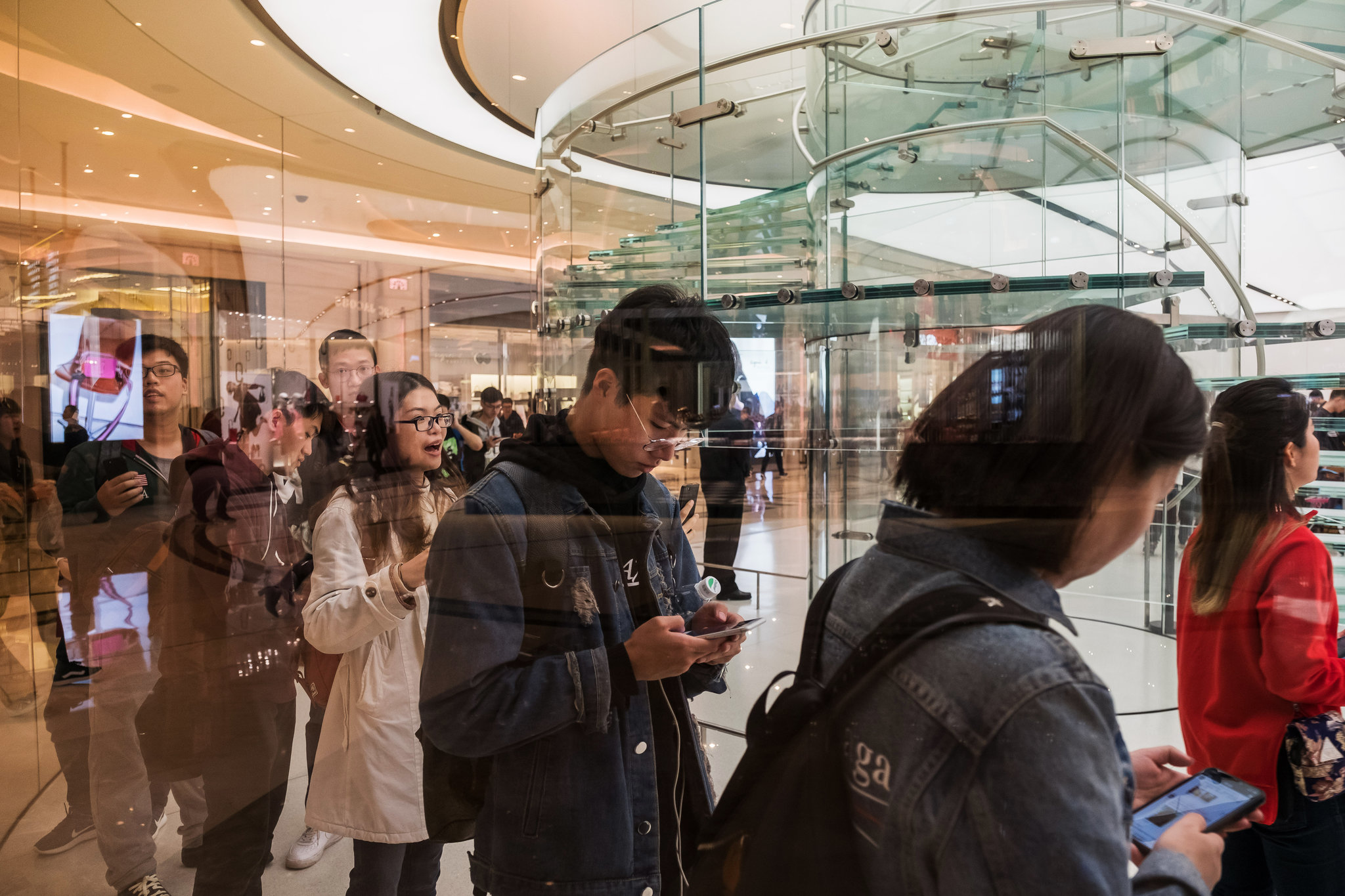 Apple has 41 stores in China and sells hundreds of millions of iPhones there.

At the same time, Mr. Cook has been pleading with the Trump White House to understand that a trade war is bad for the economy — and bad for Apple.

Mr. Cook, who knows a bit of Mandarin, has attended China’s most important political events in a critical year for Mr. Xi. Days after a Chinese Communist Party congress wrote Mr. Xi’s ideas and name into the constitution, elevating him to the same status as Mao Zedong, Mr. Cook joined a small group of American and Chinese executives for a meeting where Mr. Xi lectured about innovation and reform. 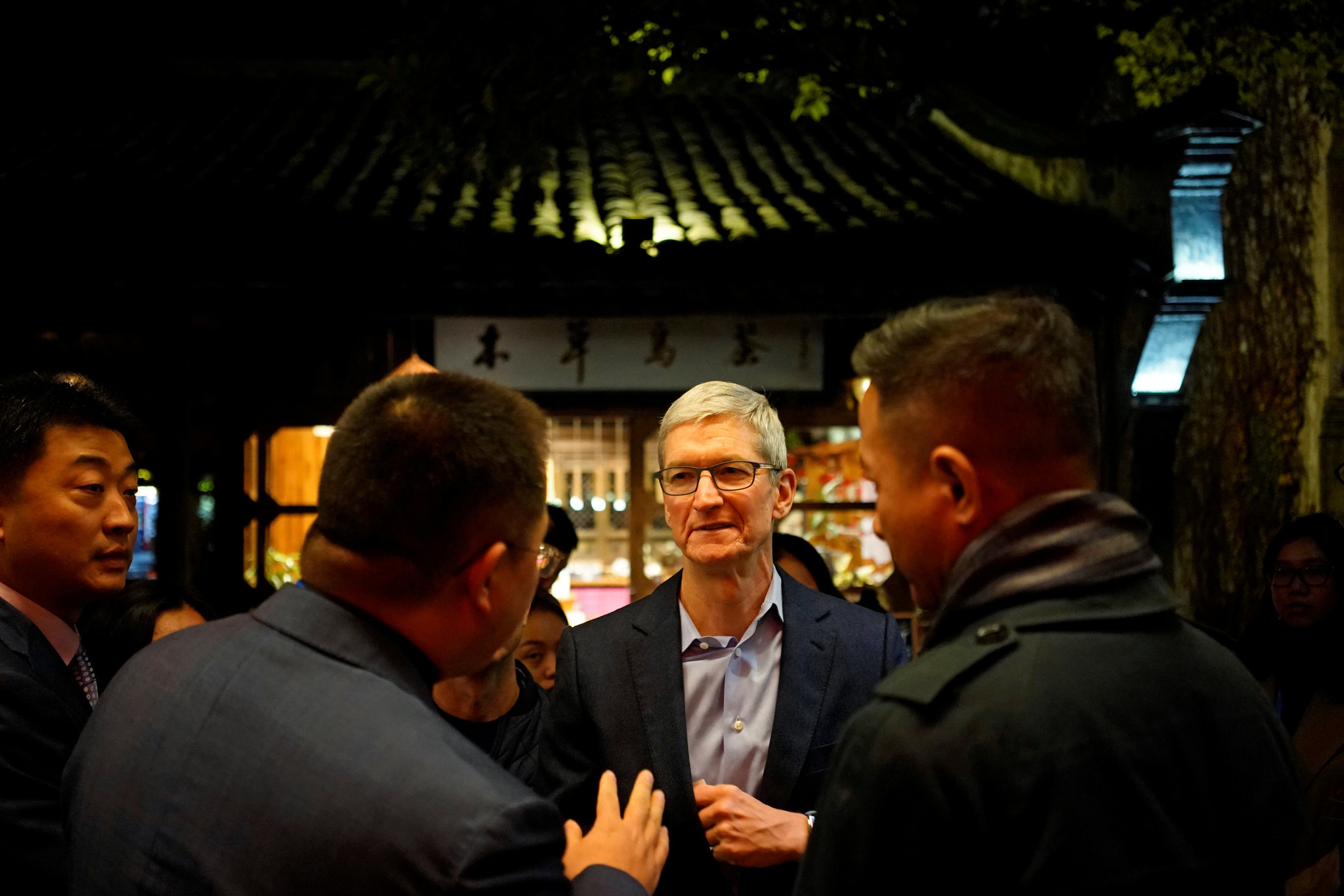 Under the leadership of Apple’s chief executive, Timothy D. Cook, the company’s business in China grew from a fledgling success to an empire with annual revenues of around $50 billion.

Mr. Cook has long defended Apple’s presence in China as a way to help change the country from the inside. “Each country in the world decides their laws and their regulations. And so your choice is: Do you participate, or do you stand on the sideline and yell at how things should be?” he said at a Fortune event in China in December. “You get in the arena, because nothing ever changes from the sideline.”

Mr. Cook has also put in time in the halls of power in Washington. Last month, he visited the White House to meet with Mr. Trump and his top economic adviser, Larry Kudlow. Mr. Cook began by applauding new corporate-tax rules and reminded Mr. Trump that Apple said it would contribute $350 billion to the American economy over the next five years, according to two people familiar with what Mr. Cook said.

Then Mr. Cook switched to explaining why he thought a trade war would reverse the new tax law’s progress, the people said. Mr. Cook told the president that tariffs were effectively a tax on consumers and that the trade deficit with China is inflated because of flaws in how it is calculated, one of the people said.

“He was very helpful in making some suggestions, and I might also add he loves the tax cut and tax reform,” Mr. Kudlow said on CNBC shortly after the meeting. “He says Apple is going to be building plants, campuses, adding jobs, lots of business investment. That was the first point he made to President Trump.”

Mr. Trump has also told crowds this year that Apple planned to build multiple factories in the United States. Apple has no plans to do so and has not publicly corrected him.

Mr. Cook has found cabinet members more accessible in the Trump administration than the Obama administration, according to a person familiar with the talks, and he has seen eye to eye with Mr. Kudlow, Steven Mnuchin, the Treasury secretary and, on some issues, Wilbur Ross, the commerce secretary. 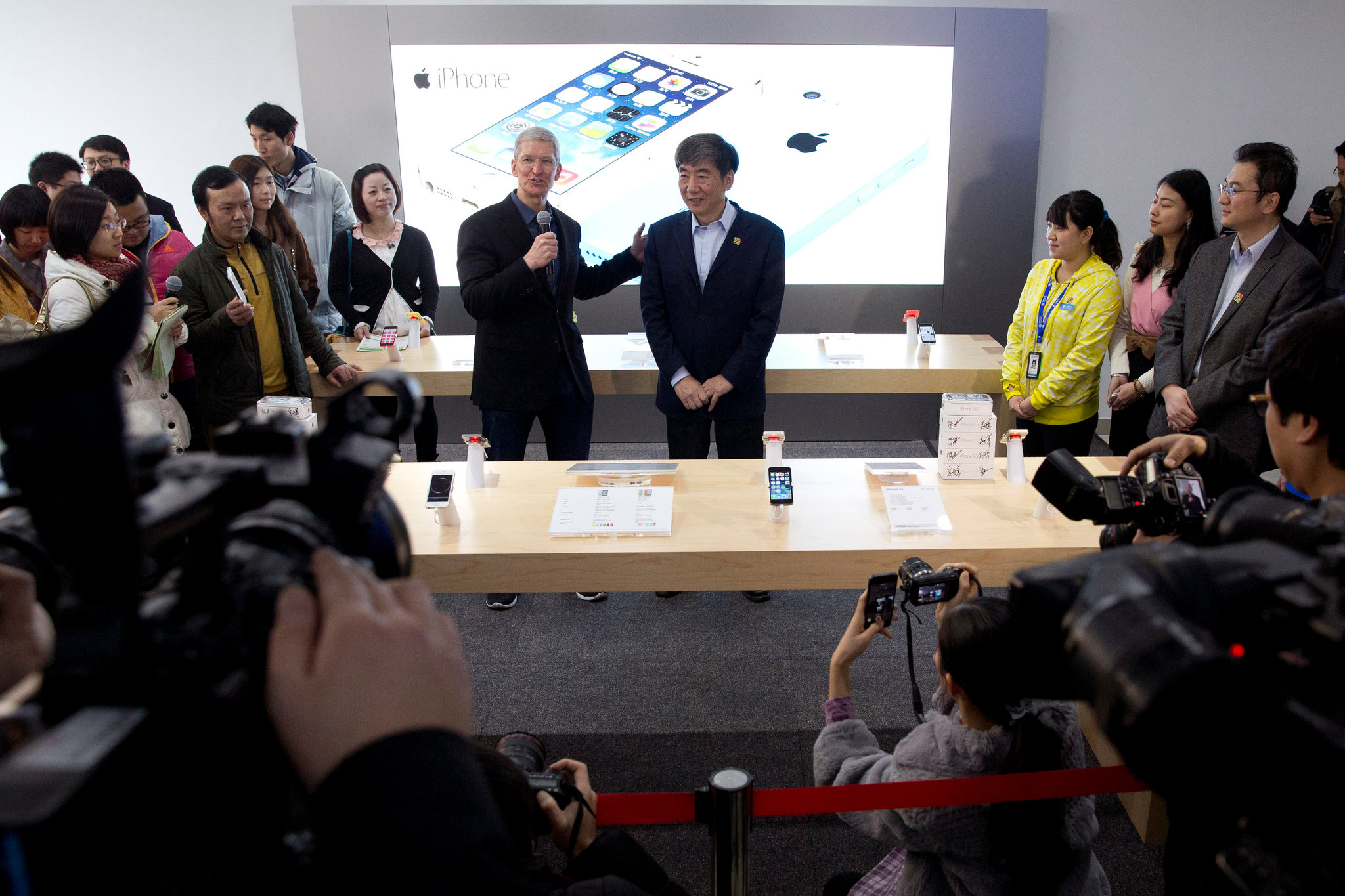 Mr. Cook spoke with Xi Guohua, the chairman of China Mobile, during the opening day of iPhone sales with the Chinese carrier in 2014.Credit

He has met with Robert Lighthizer, the United States trade representative, but they tend to disagree on trade issues, this person said, and he has avoided engaging with perhaps the administration’s most hawkish member on trade, Peter Navarro, a top adviser to the president.

Mr. Cook still sees an opening to engage on the trade issue because of disagreement inside the White House, and he doubts that a trade war — or Chinese retaliation against Apple — ultimately will happen, this person said.

“He’s willing to put a brave face on and work with the Trump administration because they probably have more at stake than any other tech company when it comes to China and the tariffs,” said Gene Munster, a longtime Apple analyst and partner at the investment firm Loup Ventures.

The specter of Chinese retaliation against Apple has increased since the administration targeted the Chinese tech company ZTE for breaking American sanctions against Iran and North Korea. But the administration backed away from stiffer penalties this month and said it would fine ZTE $1 billion and install a compliance team picked by the United States.

Other measures targeting China’s larger telecom champion, Huawei, could lead to new strains. Indeed, congressional pressure this year appeared to quash a deal in which AT&T would sell Huawei phones in America. 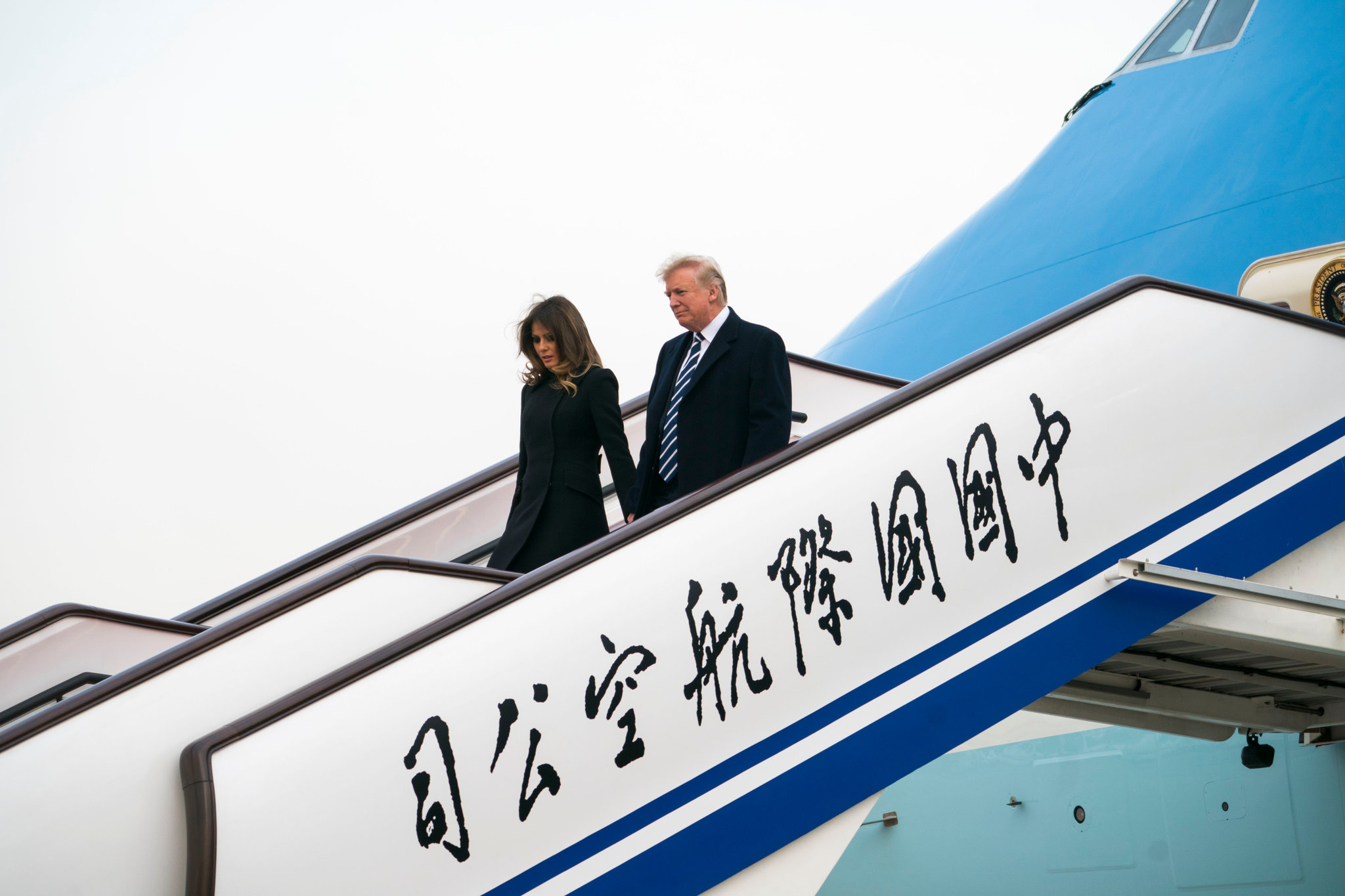 President Trump and his wife, Melania, in Beijing. The administration said on Friday it would move ahead with tariffs on $50 billion of Chinese products.

Apple, meanwhile, has a deal with China’s biggest telecom company, China Mobile, giving it a direct channel to nearly 900 million subscribers in China. The competition to sell smartphones in the country has become increasingly intense, with a number of other Chinese companies also offering high-end — but usually lower-priced — phones.

Mr. Cook’s frequent visits to China are part of Apple’s increased efforts to court China’s leadership, started in 2016 after the country suddenly removed Apple’s iTunes Movies and iBooks Store there.

Apple set up two research-and-development centers in China, made a $1 billion investment in the Chinese ride-sharing company Didi Chuxing, and created a new position, head of China, that reports directly to Mr. Cook. The company appointed Isabel Ge Mahe, who was born in China, to the role.

Apple also complied with Chinese orders to store its data on Chinese-run servers and to pull certain apps from its App Store, including The New York Times app and many that allowed Chinese users to get around censorship that blocks sites like Facebook and Twitter.

Months later, Chinese regulators delayed approvals of the iPhone 6 for additional security reviews. Apple executives perceived the moves as retaliation, said people familiar with the matter, which has not been previously reported.