a British Icon, Stages a Comeback

Once unwanted relics, the booths are being retooled … in imaginative ways, including as cellphone repair shops, tiny cafes and defibrillator. A rusting graveyard or a forest of opportunity? Many of the emblematic kiosks are being rescued from the scrap heap.

LONDON — Sometimes it’s hard to let go. For many Britons, that can apply to institutions and objects that represent their country’s past power and glory — stately homes, the monarchy … and red phone boxes.

Battered first by the march of technology and lately by the elements in junkyards, the iconic phone boxes are now staging something of a comeback. Repurposed in imaginative ways, many have reappeared on city streets and village greens housing tiny cafes, cellphone repair shops or even defibrillator machines.

The original cast-iron boxes with the domed roofs, called Kiosk No. 2 or K2, first appeared in 1926. They were designed by Giles Gilbert Scott, the architect of the Battersea Power Station in London and Liverpool Cathedral. After becoming a staple on many British streets, the booths began disappearing in the 1980s, with the privatization of British Telecom and the rise of the mobile phone consigning most of them to the scrap heap. 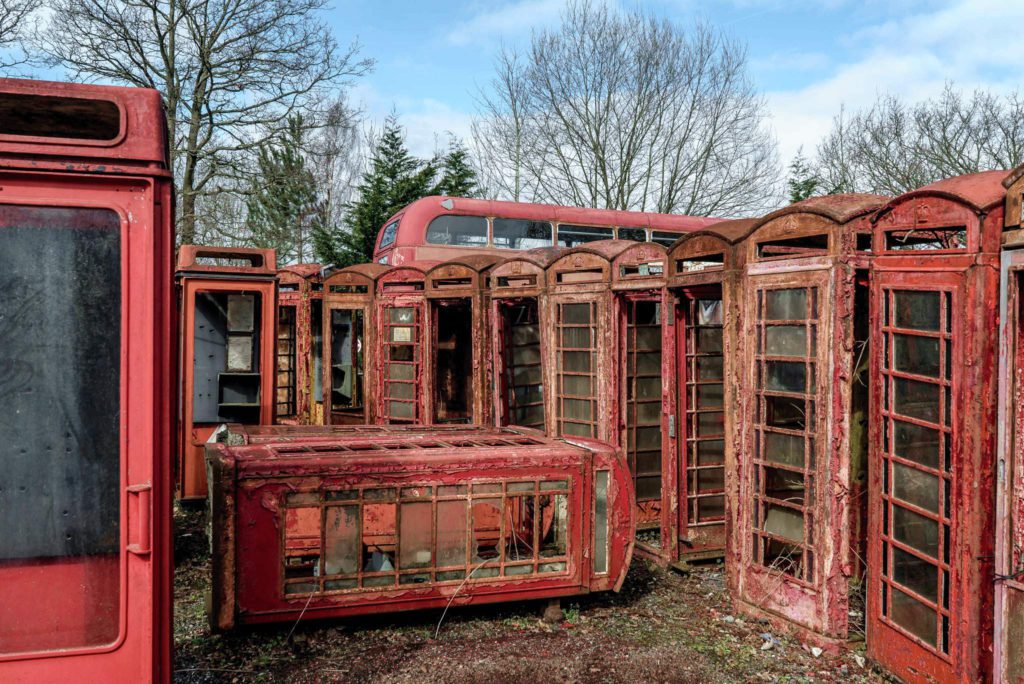 Phone boxes waiting for restoration at a site in Redhill, just south of London. 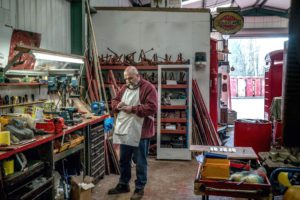 Tony Inglis in the workshop in Redhill where he gives phone boxes and other street furniture a new life.

About that time, Tony Inglis’s engineering and transport company got the job to remove phone boxes from the streets and auction them off. But he ended up buying hundreds of them himself, with the idea of renovating and selling them.

That might have seemed like a crazy idea back then. “They are so much against the times,” Mr. Inglis said in a recent interview. “They are everything that you wouldn’t do today. They’re big, heavy.”

But Mr. Inglis said he had heard the calls to preserve the kiosks and had seen how some of them were listed as historic buildings. He said he had been convinced that he could make a business of restoring them, and he was soon proved right. 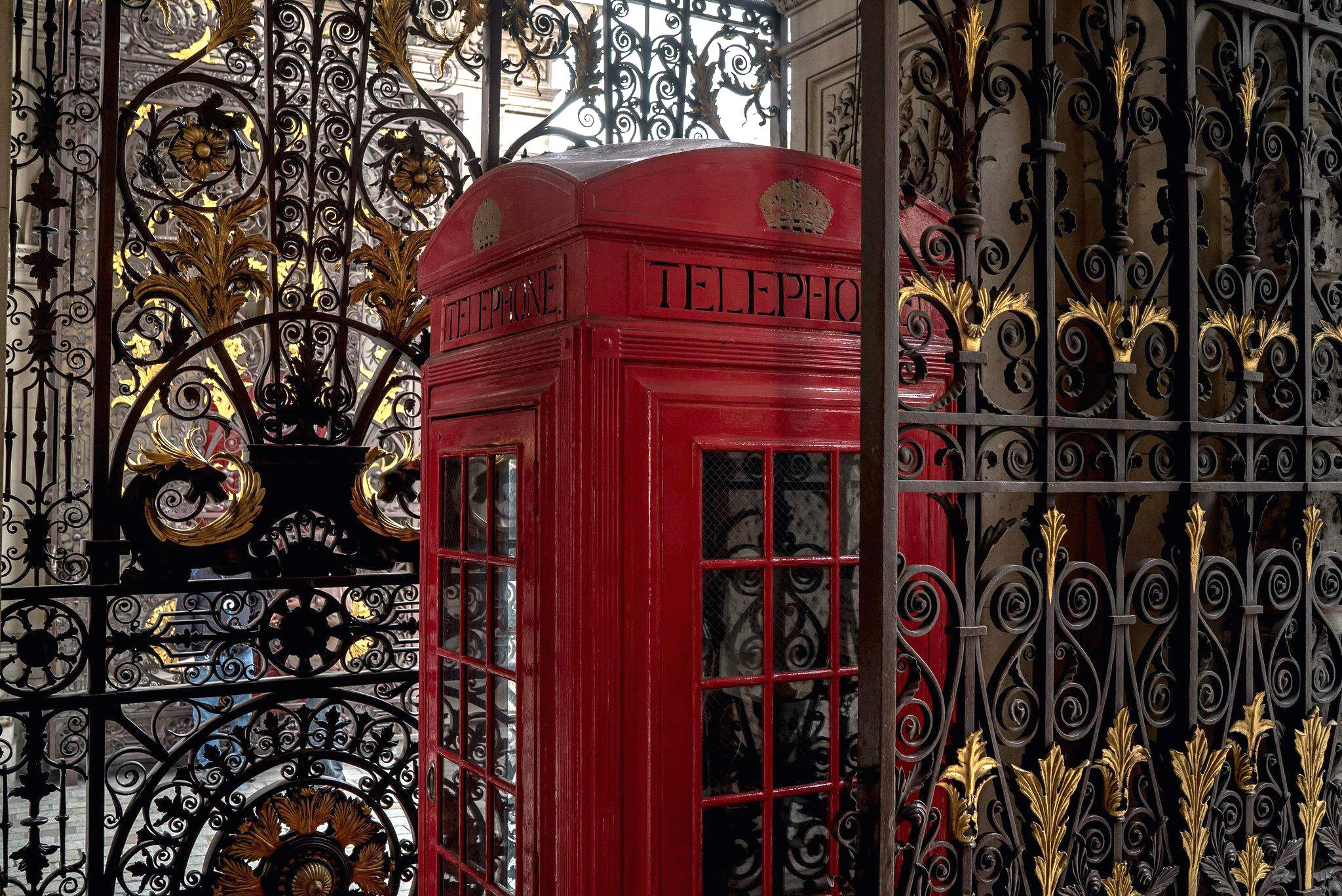 One of the oldest examples of the K2 booths, designed by Giles Gilbert Scott, at the entrance to the Royal Academy of Arts in London. 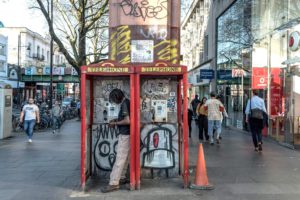 After British Telecom was privatized in the 1980s, new models, sometimes still red like these booths in South London, replaced the older-style phone boxes.

Britain has a penchant for conserving its heritage, of course. “We are obsessed with the old, and that’s because our experience of the modern world has been bruising,” Dan Snow, a well-known historian and broadcaster, said. “If you look around at the things that people are very nostalgic for, they are things that remind older people of our imperial and hegemonic past.”

That desire also drives much tourism to the country and famous buildings are often high on the lists of visitors. “We’ve got quite pressing economic reasons to celebrate our history,” Mr. Snow said. 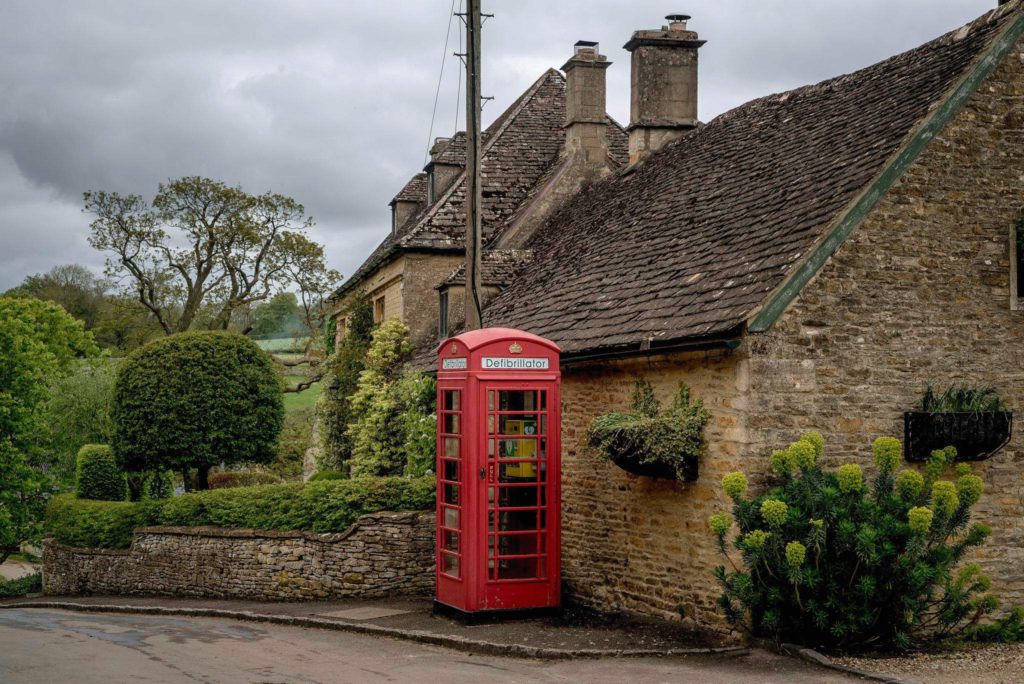 Defibrillators in phone boxes like this one in Upper Slaughter, in the west of England, can help save lives in areas where medical help can be slower to arrive. 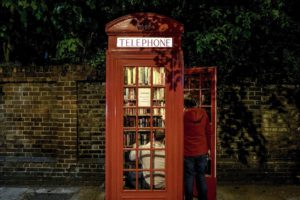 A phone box in Lewisham, South London, that houses a community library.

As Mr. Inglis and, later, other entrepreneurs got to work, retooled phone boxes began reappearing in cities and villages as people found new uses for them. Today, they are once again a familiar sight, fulfilling roles that are often just as important for the community as their original purpose.

In rural areas, where ambulances can take a relatively long time to arrive, the kiosks have taken on a lifesaving role. Local organizations can adopt them from BT for 1 pound, or just over a dollar, and install defibrillators to help in emergencies.

“The defibrillator is a good idea, because they’re in a prominent place,” Mr. Inglis said. “It’s just there in the back of your mind and the one time you need it you’ll think, ‘There’s one on the village green!’” 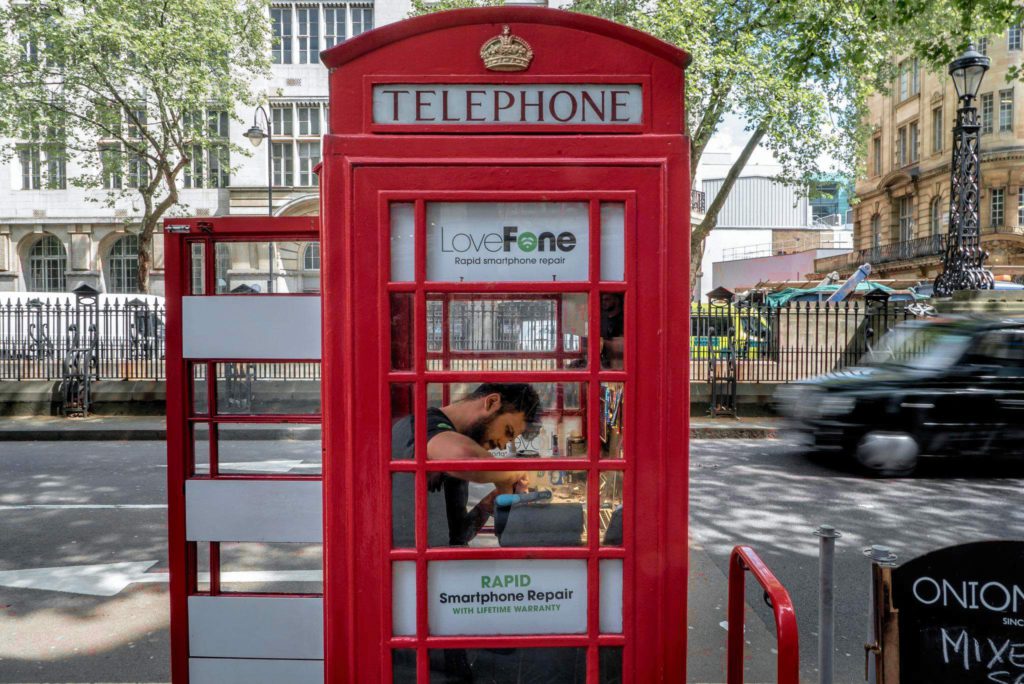 Most cellphone repairs, including fixing cracked screens, can be done in this tiny workshop in London. 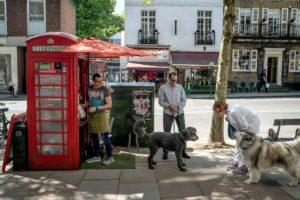 Artisan coffee and locally made pastries have replaced the telephone in this kiosk in North London.

Others also looked at the phone boxes and saw business opportunities in those cramped spaces. LoveFone, a company that advocates repairing cellphones rather than disposing of them, opened a mini workshop in a London kiosk in 2016.

In addition to being eye-catching, the tiny shops made economic sense, according to Robert Kerr, a co-founder of LoveFone. He said that one of the boxes generated around $13,500 in revenue a month and only cost around $400 to rent.

Mr. Inglis said phone boxes evoked an era when things were built to last and to be useful. Early models, for example, had mirrors and little shelves to rest an umbrella or a parcel on.

“I think they are an honest construction,” Mr. Inglis said. “I like what they are to people, and I enjoy bringing things back.” 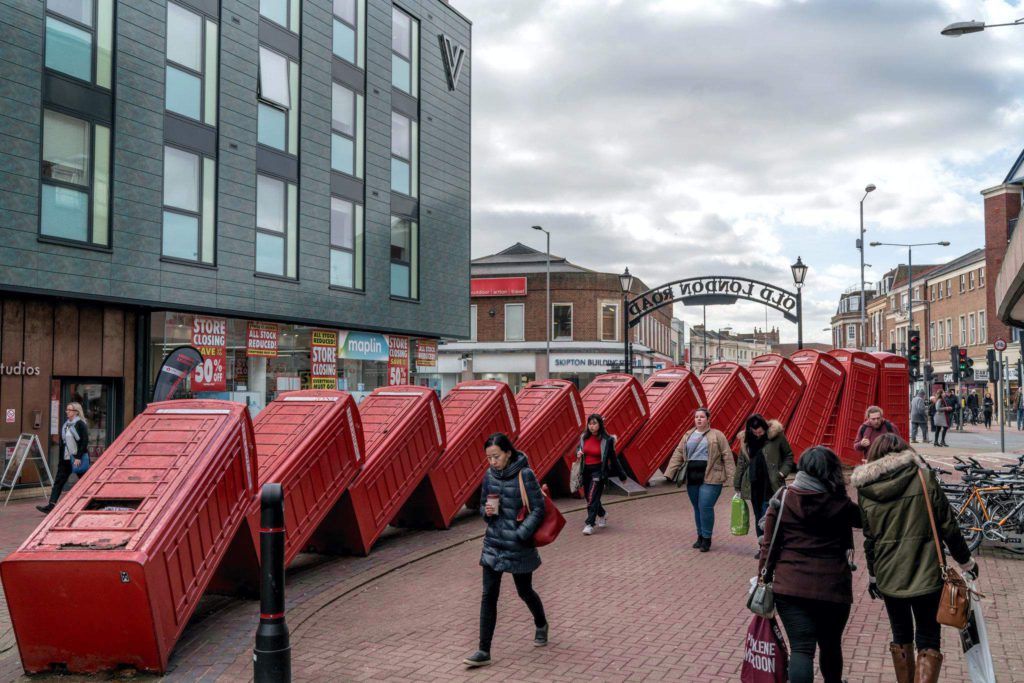 An art installation in Kingston upon Thames, England. 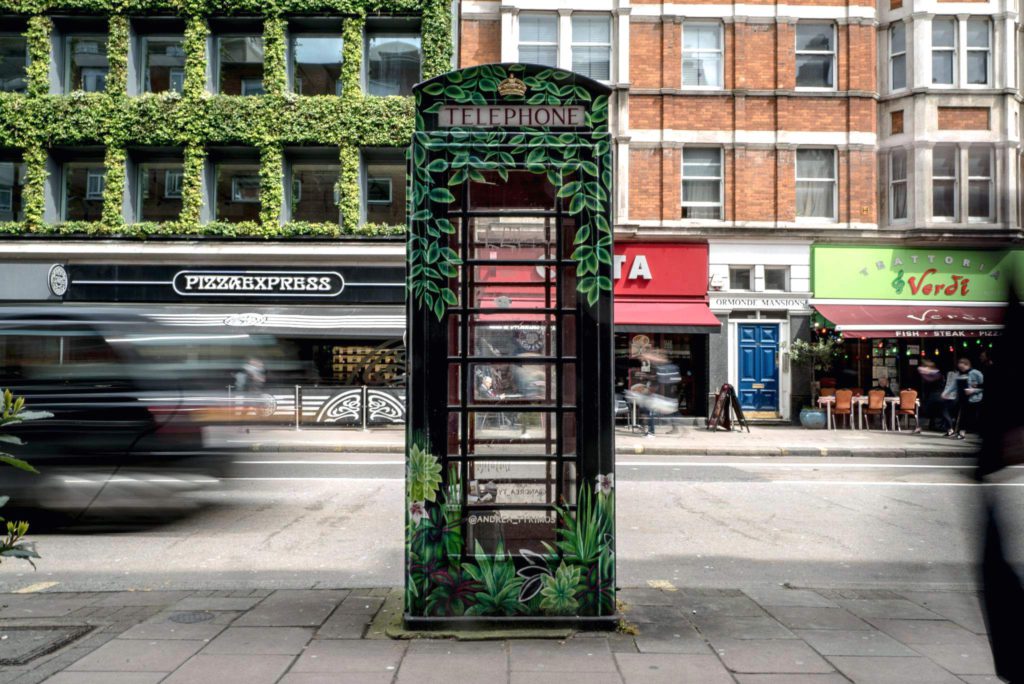 Not red anymore: a decorated booth in Central London.

Полную версию статьи читайте на сайте NY Times
или у нас на занятиях
New York TimesанглийскийБританияОбщество
Заказать звонок
+
Жду звонка!
Privacy Settings
We use cookies to enhance your experience while using our website. If you are using our Services via a browser you can restrict, block or remove cookies through your web browser settings. We also use content and scripts from third parties that may use tracking technologies. You can selectively provide your consent below to allow such third party embeds. For complete information about the cookies we use, data we collect and how we process them, please check our Privacy Policy
Youtube
Consent to display content from Youtube
Vimeo
Consent to display content from Vimeo
Google Maps
Consent to display content from Google
Save