The countries where politically connected businessmen are most likely to prosper

AMERICA’S Gilded Age, in the late 19th century, saw tycoons such as … John D. Rockefeller industrialise the country—and accumulate vast fortunes, build palatial mansions and bribe politicians. Then came the backlash. Between 1900 and 1945 America began to regulate big business and build a social safety net. In her book “Plutocrats”, Chrystia Freeland argues that emerging markets are now experiencing their first gilded age, and rich countries their second, with the world’s wealthiest 1%, who benefited disproportionately from 20 years of globalisation, forming a “new virtual nation of Mammon”.

Inventing a better widget, tastier snack or snazzier computer program is one thing. But many of today’s tycoons are accused of making fortunes by “rent-seeking”: grabbing a bigger slice of the pie rather than making the pie bigger. In technical terms, an economic rent is the difference between what people are paid and what they would have to be paid for their labour, capital, land (or any other inputs into production) to remain in their current use. In a world of perfect competition, rent would not exist. Common examples of rent-seeking (which may or may not be illegal) include forming cartels and lobbying for rules that benefit a firm at the expense of competitors and customers.

Class warriors and free-market devotees alike are worrying about rent-seeking. American libertarians fear an elite has rigged their country’s economy; plenty of ordinary Joes reckon the government and Federal Reserve care more about Wall Street than Main Street. Many hedge-fund managers sniff that China is a house of cards built by indebted cronies.

To test the claim that rent-seekers are on the rampage, we have created a crony-capitalist index. Our approach builds on work by Ruchir Sharma of Morgan Stanley Investment Management, Aditi Gandhi and Michael Walton of New Delhi’s Centre for Policy Research, and others. We use data from Forbes to calculate the total wealth of those of the world’s billionaires who are active mainly in rent-heavy industries, and compare that total to world GDP to get a sense of its scale. We show results for 23 countries — the five largest developed ones, the ten largest developing ones for which reliable data are available, and a selection of eight smaller ones where cronyism is thought to be a big problem. The higher the ratio, the more likely the economy suffers from a severe case of crony-capitalism. 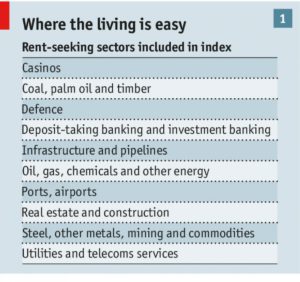 We have included industries that are vulnerable to monopoly, or that involve licensing or heavy state involvement (see table 1). These are more prone to graft, according to the bribery rankings produced by Transparency International, an anti-corruption watchdog. Some are obvious. Banks benefit from an implicit state guarantee that lowers their cost of borrowing. When publicly owned coal mines, land and telecoms spectrum are handed to tycoons on favourable terms, the public suffers. But the boundary between legality and graft is complex. A billionaire in a rent-heavy industry need not be corrupt or have broken the law. Industries that are close to the state are still essential, and can be healthy and transparent.

A galaxy of riches 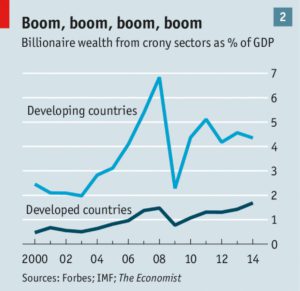 Billionaires in crony sectors have had a great century so far (see chart 2). In the emerging world their wealth doubled relative to the size of the economy, and is equivalent to over 4% of GDP, compared with 2% in 2000. Developing countries contribute 42% of world output, but 65% of crony wealth. Urbanisation and a long economic boom have boosted land and property values. A China-driven commodity boom enriched natural-resource owners from Brazil to Indonesia. Some privatisations took place on dubious terms.

Of the world’s big economies, Russia scores worst (see chart 3). The transition from communism saw political insiders grab natural resources in the 1990s, and its oligarchs became richer still as commodity prices soared. Unstable Ukraine looks similar. Mexico scores badly mainly because of Carlos Slim, who controls its biggest firms in both fixed-line and mobile telephony. French and German billionaires, by contrast, rely rather little on the state, making their money largely from retail and luxury brands.

America scores well, too. The total wealth of its billionaires is high relative to GDP, but was mostly created in open sectors. Silicon Valley’s wizards are far richer than America’s energy billionaires. It is one of the few countries where rent-seeking fortunes grew only in line with the economy in recent years, which explains its improved position since 2007. Despite concerns about vampire-squid financiers, few of its billionaires made their money in banking. Even including private equity as rent-seeking, on the grounds that it benefits from tax breaks and cheap loans, would make little difference. Compared with Larry Ellison of Oracle, Stephen Schwarzman of Blackstone is a pauper.

Countries that do well on the crony index generally have better bureaucracies and institutions, as judged by the World Economic Forum. But efficient government is no guarantee of a good score: Hong Kong and Singapore are packed with billionaires in crony industries. This reflects scarce land, which boosts property values, and their role as entrepots for shiftier neighbours. Hong Kong has also long been lax on antitrust: it only passed an economy-wide competition law two years ago.

Another surprise is that despite its reputation for graft, mainland China scores quite well. One reason is that the state owns most natural resources and banks; these are a big source of crony wealth in other emerging economies. Another is that China’s open industries have fostered a new generation of fabulously rich entrepreneurs, including Jack Ma of Alibaba, an e-commerce firm, and Liang Wengen of Sany, which makes diggers and cranes.

One of the most improved countries is India, which moved from sixth place in our ranking to ninth. Recent graft scandals and a slowing economy have hurt many of its financially leveraged and politically connected businessmen, while those active in technology, pharmaceuticals and consumer goods have prospered. Turkish billionaires in rent-seeking industries have been hit by their country’s financial turmoil. By contrast most countries in South-East Asia, including Indonesia, Thailand and the Philippines, saw their scores get worse between 2007 and 2014, as tycoons active in real estate and natural resources got richer.

Who are you calling a crony?

Our crony index has three big shortcomings. One is that not all cronies make their wealth public. This may be a particular problem in China, where recent exposés suggest that many powerful politicians have disguised their fortunes by persuading friends and family to hold wealth on their behalf. Unreliable property records also help to disguise who owns what.

Second, our categorisation of sectors is crude. Rent-seeking may take place in those we have labelled open, and some countries have competitive markets we label crony. Some think America’s big internet firms are de-facto monopolies that abuse their positions. South Korea’s chaebol, which sell cars and electronics to the world, are mainly in industries we classify as open. But they have a history of bribing politicians at home. China’s billionaires, in whatever industry, are often chummy with politicians and get subsidised credit from state banks. According to Rupert Hoogewerf of the Hurun Report, a research firm, a third are members of the Communist Party. Sectors that are cronyish in developing countries may be competitive in rich ones: building skyscrapers in Mumbai is hard without paying bribes, and easy in Berlin. Our index does not differentiate.

The third limitation is that we only count the wealth of billionaires. Plenty of rent-seeking may enrich the very wealthy who fall short of that cut-off. America’s subprime boom saw hordes of bankers earn cumulative bonuses in the millions of dollars, not billions. Crooked Chinese officials may have Range Rovers and secret boltholes in Singapore — but not enough wealth to join a list of billionaires. So our index is only a rough guide to the concentration of wealth in opaque industries compared with more competitive ones.

Despite the boom in crony wealth, there are grounds for optimism. Some countries are tightening antitrust rules. Mexico has many lucrative near-monopolies, from telecoms to food, but its government is at last aiming to improve regulation and boost competition. India’s legal system is trying to jail a minister accused of handing telecoms licences to his chums.

Encouragingly, there are also hints that cronyism may have peaked. The share of billionaire wealth from rent-seeking industries has declined in developing countries, from a high of 76% in 2008 to 58% (see chart 4). That partly reflects lower commodity prices. But now that emerging markets are slowing, investors are becoming pickier. More are steering clear of firms in opaque industries with bad governance. The price-earnings ratio of firms in crony sectors is now at its biggest discount to firms in open sectors for 15 years. That suggests that the highest returns to outside investors are to be found in open industries.

Perhaps when growth picks up again in …

Полную версию статьи читайте на сайте The economist
или у нас на занятиях
The EconomistанглийскийПолитика
Заказать звонок
+
Жду звонка!
Privacy Settings
We use cookies to enhance your experience while using our website. If you are using our Services via a browser you can restrict, block or remove cookies through your web browser settings. We also use content and scripts from third parties that may use tracking technologies. You can selectively provide your consent below to allow such third party embeds. For complete information about the cookies we use, data we collect and how we process them, please check our Privacy Policy
Youtube
Consent to display content from Youtube
Vimeo
Consent to display content from Vimeo
Google Maps
Consent to display content from Google
Save