RUSSIA and Ukraine have edged closer to a military confrontation after … Vladimir Putin, Russia’s president, asked the upper house of the Russian parliament to approve the deployment of the country’s armed forces in Ukraine. The request was made “in connection with the extraordinary situation developing in Ukraine and the danger to the lives of the citizens of Russian Federation and our compatriots and military personnel located within the territory”.

An official in Ukraine’s armed forces says that after several days without the use of force, military units across Ukraine have been put on heightened alert and told to open afire if they come under attack. A week ago Russian and Ukrainian military commanders informally agreed among themselves to avoid confrontation and provocations. But in the past two days several Ukrainian military units have come under attack from unidentified armed men, who are widely believed to be Russian forces. A Ukrainian military airport in Kirovsky was attacked on February 28th by some 350 men in camouflage, who smashed up navigation systems, rendering the airport unusable. Feodosiya, Ukraine’s naval base in the Black Sea, was approached by Zubr, Russian-made air-cushioned hovercraft, which retreated after the Ukrainian navy threatened resistance.

At the entrance to Balaclava bay on March 1st were ten military personnel trucks with Russian number plates, alongside five armoured vehicles with mounted machine guns, blocking Ukrainian customs posts. Each truck held some 30 masked men with automatic rifles, who did not respond to questions. Two military ambulances were parked next to them, and two Russian Orthodox priests stood holding a large cross. A small crowd of perhaps two-dozen local people waved Russian flags.

Meanwhile, the causeway between Crimea and mainland Ukraine has been blocked. On a main road between the cities of Simferopol and Sebastopol, a checkpoint manned by an unarmed «self defence» unit and leather-clad pro-Russia bikers displays a sign reading: «Where we are — is Russia». The bikers have put up a black banner with red lettering saying: «Russia has always been a graveyard for evil ideas. You cannot win over a graveyard, you can only stay in it — for ever.»

It is understood that Russia has sent its elite units to Crimea, and that it now has between 6,000 and 7,000 men on the peninsula in addition to those already stationed in Russian bases there. The movement of troops started on February 23rd, the day of the closing ceremony of the Sochi Olympics. “This feels like 22nd June 1941,” the Ukrainian official said, referring to the day when Nazi Germany attacked the Soviet Union. 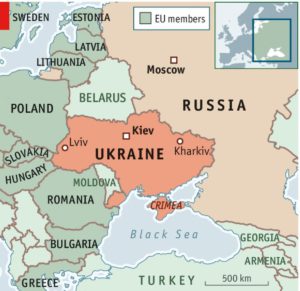 Ukraine’s armed forces are much less well-equipped than the Russian army. The total number of Ukrainian military personnel in Crimea is estimated at about 14,000. But only a few thousands of those troops are ready for combat. The forces have lacked a clear chain of command since the overthrow of Viktor Yanukovych, who on February 28th gave a press conference in Russia in which he insisted that he was still Ukraine’s president. Ukraine’s new defence minister was appointed only a couple of days ago. Russia has chosen Ukraine’s moment of greatest weakness to move into Crimea.

In the early hours of February 28th, well equipped and professional-looking men in camouflage uniforms with assault rifles took over two Crimean airports, set up road blocks, hemmed Ukraine’s navy into the Balaklava bay near Sevastopol and established control over the local television tower. The men displayed no insignias and did not answer questions. But by the evening armoured personnel-carriers with Russian markings were moving from Sevastopol, where Russia has a naval base, to Simferopol, in the centre of the peninsula, where several military cargo-planes were reported to be landing at a nearby Russian military base. The airspace over Crimea was closed. All this was done swiftly and silently.

Alexander Turchinov, the speaker of the Ukrainian parliament and the acting president, said that Russia has started an “undisguised aggression against our country…Under the cover of military exercises they [the Russians] brought their military forces into Crimea and are trying to blockade the positions of Ukrainian military forces.”

Mr. Turchinov said that Russia was following the same script it had used during a war with Georgia in 2008, which resulted in Abkhazia and South Ossetia, two breakaway territories, being occupied by Russian forces. Then, Russia issued people in South Ossetia and Abkhazia with Russian passports, and when fighting broke out between South Ossetia and Georgia, said it needed to protect the lives of its citizens. By contrast, there has been no fighting in Crimea so far. Russia’s de facto invasion has instead prompted parallels with the Soviet invasion of Czechoslovakia in 1968.

Russian television channels, which are widely watched in Crimea, provided propaganda to give cover to what increasingly looks like a well-prepared military takeover. It is happening on the 60th anniversary of Nikita Khrushchev’s transfer of Crimea from Russia to Ukraine, when both were part of the Soviet Union. Whether Russia’s ultimate goal this time is to annex Crimea or simply to gain leverage over Ukraine’s new government is unclear.

A day earlier, on February 27th, unidentified men had taken over the parliament in Simferopol, disarming and kicking out the local police. The gunmen then let in the local deputies, took away their mobile telephones and oversaw the voting in of a new government led by Sergei Aksenov, the leader of the Russian Unity party. The parliament then called a referendum on Crimea’s autonomy. Valentina Samar, an investigative reporter in Crimea, says the vote was rigged.

Mr. Aksenov, nicknamed the “Goblin”, declared himself in charge of Crimea’s armed forces, and told them not to respond to orders from Kiev. He has also announced that the Berkut — the quad of riot police that brutalised protestors in Kiev’s Independence Square, and which was disbanded by the new government — is to be restored under his command. Russia said it had started issuing Berkut officers with Russian passports. Mr. Aksenov then called on Mr. Putin to provide Russian help in maintaining order in Crimea. Russia’s own parliament is due to meet next week to discuss a simplified procedure to integrate new territories.

Arseny Yatseniuk, Ukraine’s prime minister, appealed to the Kremlin to “stop provoking civil and military conflict. We demand that the Russian Federation recalls its troops.” The majority of Crimea’s 2m inhabitants are ethnic Russians, but some 13% are Crimean Tartars, who suffered mass killings under early Soviet rule and mass deportations under Stalin. They returned to Crimea after the collapse of the Soviet Union, and most have no desire to be brought back into Russia. “This is an unannounced and open aggression against the territory of Ukraine by the Russian Federation, which is supposed to be a guarantor of its sovereignty,” says Refat Chubarov, the leader of Crimea’s Tartars. According to the Budapest agreement of 1994, which was signed by Ukraine, Russia, America and Britain, Ukraine gave up its nuclear arms in exchange for security guarantees from the co-signatories.

In Simferopol, a few dozen men and women came out on …

Полную версию статьи читайте на сайте The economist
или у нас на занятиях
The EconomistанглийскийПолитикаРоссия
Заказать звонок
+
Жду звонка!
Privacy Settings
We use cookies to enhance your experience while using our website. If you are using our Services via a browser you can restrict, block or remove cookies through your web browser settings. We also use content and scripts from third parties that may use tracking technologies. You can selectively provide your consent below to allow such third party embeds. For complete information about the cookies we use, data we collect and how we process them, please check our Privacy Policy
Youtube
Consent to display content from Youtube
Vimeo
Consent to display content from Vimeo
Google Maps
Consent to display content from Google
Save