King, a maker of addictive games, files for an IPO

THE commuter you can see hunched over his smartphone, staring intently … at the screen and occasionally swiping it with his finger may be reading urgent e-mails or checking the latest news. Quite likely, however, he is playing “Candy Crush Saga”, a game that involves lining up three virtual sweets, time and time again, for level after level (there are hundreds). According to King Digital Entertainment, its creator, “Candy Crush Saga” is played more than 1 billion times every day, by 93m people.

On February 18th King filed its registration statement for an initial public offering on the New York Stock Exchange. King, which was founded in Stockholm but has offices in London and programmers in other European cities too, expects to raise up to $500m. Its statement does not say how many shares it will sell or at what price.

King’s easy-to-play games are both wildly popular and remarkably lucrative. According to App Annie, a research firm, “Candy Crush Saga” is the second-highest grossing app in both Apple’s and Google’s online stores in America, behind only “Clash of Clans”, made by Finland’s Supercell. In Britain, it is number one. Two more of King’s games, “Farm Heroes Saga” and “Pet Rescue Saga” are also near the top of the charts.

You do not have to pay to play these games, but for a few pence you can buy extra lives or help to push you on to the next level. Few bother, but enough do. King’s revenue jumped to $1.9 billion in 2013, from $164m in 2012 (see chart). Almost all of that came from players: King stopped selling advertising space last year. Because the costs of making a game are pretty much fixed, every extra paying user means more profit: last year King earned $567.6m, up from only $7.8m the year before. It has, however, greatly increased its spending on marketing as well as on developing games. 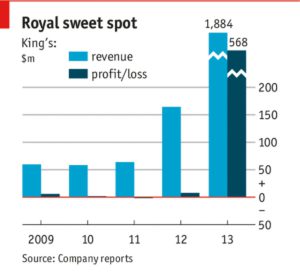 Some have found that success in casual games can be fragile. Zynga, an American firm that floated on the stockmarket in December 2011, proved over-reliant on Facebook as a platform for its games and missed the leap to mobile. Its revenue has shrunk, to $147m in the latest quarter, and it is losing both money and staff. Under a newish boss, it is trying to rebuild itself: recently it said it was buying Natural Motion, a British maker of mobile games, for $527m.

Facebook is important to King too: “Candy Crush Saga” is …

Полную версию статьи читайте на сайте The economist
или у нас на занятиях
The EconomistанглийскийКультураТехнологииЭкономика
Заказать звонок
+
Жду звонка!
Privacy Settings
We use cookies to enhance your experience while using our website. If you are using our Services via a browser you can restrict, block or remove cookies through your web browser settings. We also use content and scripts from third parties that may use tracking technologies. You can selectively provide your consent below to allow such third party embeds. For complete information about the cookies we use, data we collect and how we process them, please check our Privacy Policy
Youtube
Consent to display content from Youtube
Vimeo
Consent to display content from Vimeo
Google Maps
Consent to display content from Google
Save