Saying sorry is not enough

THE widower of a school teacher beaten to death by Red Guards in 1966 has refused to accept … the apology of one of those who participated in his wife’s killing. Wang Jingyao, who is now 93, called the apology for the death of his wife, Bian Zhongyun, hypocritical. Ms Bian was the deputy headteacher of an elite girls’ school in Beijing when the Cultural Revolution broke out. On January 13th this year, one of the former Red Guards accused of participating in her death, Song Binbin, now 64, had visited her old school, bowed before a bust of Ms Bian and apologised. “Please let me express my everlasting solicitude and apologies to Teacher Bian,” she said, according to the Beijing News, a newspaper (here, in Chinese). «I failed properly to protect the school leaders, and this has been a lifelong source of anguish and remorse.»

The death of Ms Bian is usually regarded as the first of thousands of murders of teachers as China descended into chaos, with teenagers encouraged by Mao Zedong to rise up against authority. Mr Wang called Ms Song’s apology “hypocritical” and said he would never accept it. Meanwhile, Ms. Song’s confession has drawn both scorn and renewed calls for a national accounting of the Cultural Revolution. 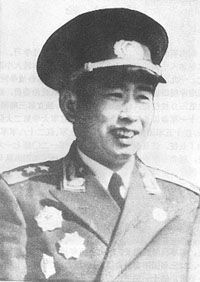 Song Renqiong, before the trouble began

Ms Song was not just any old Red Guard. Her father was Song Renqiong (pictured, in a 1955 photo), a comrade of Chairman Mao, and she became a famous participant in the Cultural Revolution, a mass movement launched by Chairman Mao to purge the party of what he considered to be ideological foes. Two weeks after the killing of Ms Bian, Ms Song was photographed on Tiananmen Gate overlooking Tiananmen Square, pinning a red armband, the mark of the Red Guards, on the arm of Chairman Mao.

After the Cultural Revolution, Ms Song went to America to study, completing a doctorate at MIT. She then worked for the government of the state of Massachussetts before returning to China in 2003. She is the second high-profile revolutionary heir to apologise for Cultural Revolution misdeeds in recent months. In October, Chen Xiaolu, son of Marshal Chen Yi, a senior military leader, apologised both in writing and in person to former teachers at his Beijing school who had been tortured and imprisoned during the turmoil.

Zhang Lifan, a historian, says these high-profile apologies have sparked ire, both from Maoists who believe there should be no regrets, and from those demanding a full accounting of the Cultural Revolution’s death toll. Even if Ms. Song and Mr. Chen made amends for selfish or political reasons, their words and gestures are still important, says Mr Zhang. «It is still better than those who refuse to repent until they die. The conflict and hatred should be solved. The nation must move forward.»

All this public remorse, coming from children of the Party’s founding elders, …

Полную версию статьи читайте на сайте The economist
или у нас на занятиях
The EconomistанглийскийКультураПолитика
Заказать звонок
+
Жду звонка!
Privacy Settings
We use cookies to enhance your experience while using our website. If you are using our Services via a browser you can restrict, block or remove cookies through your web browser settings. We also use content and scripts from third parties that may use tracking technologies. You can selectively provide your consent below to allow such third party embeds. For complete information about the cookies we use, data we collect and how we process them, please check our Privacy Policy
Youtube
Consent to display content from Youtube
Vimeo
Consent to display content from Vimeo
Google Maps
Consent to display content from Google
Save