Cheap and ubiquitous building blocks for digital products and services have caused an explosion in startups. Ludwig Siegele weighs its significance

About 540M Years ago something amazing happened on planet Earth… life forms began to multiply, leading to what is known as the “Cambrian explosion”. Until then sponges and other simple creatures had the planet largely to themselves, but within a few million years the animal kingdom became much more varied.

This special report will argue that something similar is now happening in the virtual realm: an entrepreneurial explosion. Digital startups are bubbling up in an astonishing variety of services and products, penetrating every nook and cranny of the economy. They are reshaping entire industries and even changing the very notion of the firm. “Software is eating the world,” says Marc Andreessen, a Silicon Valley venture capitalist.

This digital feeding frenzy has given rise to a global movement. Most big cities, from Berlin and London to Singapore and Amman, now have a sizeable startup colony (“ecosystem”). Between them they are home to hundreds of startup schools (“accelerators”) and thousands of co-working spaces where caffeinated folk in their 20s and 30s toil hunched over their laptops. All these ecosystems are highly interconnected, which explains why internet entrepreneurs are a global crowd. Like medieval journeymen, they travel from city to city, laptop not hammer in hand. A few of them spend a semester with “Unreasonable at Sea”, an accelerator on a boat which cruises the world while its passengers code. “Anyone who writes code can become an entrepreneur—anywhere in the world,” says Simon Levene, a venture capitalist in London.

Here we go again, you may think: yet another dotcom bubble that is bound to pop. Indeed, the number of pure software startups may have peaked already. And many new offerings are simply iterations on existing ones. Nobody really needs yet another photo-sharing app, just as nobody needed another site for pet paraphernalia in the first internet boom in the late 1990s. The danger is that once again too much money is being pumped into startups, warns Mr Andreessen, who as co-founder of Netscape saw the bubble from close by: “When things popped last time it took ten years to reset the psychology.” And even without another internet bust, more than 90% of startups will crash and burn. 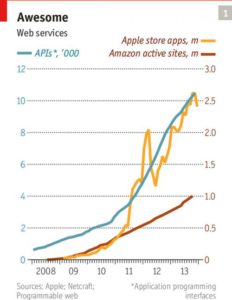 But this time is also different, in an important way. Today’s entrepreneurial boom is based on more solid foundations than the 1990s internet bubble, which makes it more likely to continue for the foreseeable future. One explanation for the Cambrian explosion of 540m years ago is that at that time the basic building blocks of life had just been perfected, allowing more complex organisms to be assembled more rapidly. Similarly, the basic building blocks for digital services and products—the “technologies of startup production”, in the words of Josh Lerner of Harvard Business School—have become so evolved, cheap and ubiquitous that they can be easily combined and recombined.

Some of these building blocks are snippets of code that can be copied free from the internet, along with easy-to-learn programming frameworks (such as Ruby on Rails). Others are services for finding developers (eLance, oDesk), sharing code (GitHub) and testing usability (UserTesting.com). Yet others are “application programming interfaces” (APIs), digital plugs that are multiplying rapidly (see chart 1). They allow one service to use another, for instance voice calls (Twilio), maps (Google) and payments (PayPal). The most important are “platforms”—services that can host startups’ offerings (Amazon’s cloud computing), distribute them (Apple’s App Store) and market them (Facebook, Twitter). And then there is the internet, the mother of all platforms, which is now fast, universal and wireless.

Startups are best thought of as experiments on top of such platforms, testing what can be automated in business and other walks of life. Some will work out, many will not. Hal Varian, Google’s chief economist, calls this “combinatorial innovation”. In a way, these startups are doing what humans have always done: apply known techniques to new problems. The late Claude Lévi-Strauss, a French anthropologist, described the process as bricolage (tinkering).

Technology has fuelled the entrepreneurial explosion in other ways, too. Many consumers have got used to trying innovative services from firms with strange names (which, unavoidably, will abound in this special report). And thanks to the web, information about how to do a startup has become more accessible and more uniform. Global standards are emerging for all things startup, from programming tools to term sheets for investments, dress code and vocabulary, making it easy for entrepreneurs and developers to move around the world.

Invent yourself a job

Economic and social shifts have provided added momentum for startups. The prolonged economic crisis that began in 2008 has caused many millennials—people born since the early 1980s—to abandon hope of finding a conventional job, so it makes sense for them to strike out on their own or join a startup.

A lot of millennials are not particularly keen on getting a “real” job anyway. According to a recent survey of 12,000 people aged between 18 and 30 in 27 countries, more than two-thirds see opportunities in becoming an entrepreneur. That signals a cultural shift. “Young people see how entrepreneurship is doing great things in other places and want to give it a try,” notes Jonathan Ortmans of the Ewing Marion Kauffman Foundation, which organizes an annual Global Entrepreneurship Week.

Lastly, startups are a big part of a new movement back to the city. Young people increasingly turn away from suburbia and move to hip urban districts, which become breeding grounds for new firms. Even Silicon Valley’s centre of gravity is no longer along Highway 101 but in San Francisco south of Market Street.

Describing what sorts of businesses these startups engage in would at best provide a snapshot of a fast-moving target. In essence, software (which is at the heart of these startups) is eating away at the structures established in the analogue age. LinkedIn, a social network, for instance, has fundamentally changed the recruitment business. Airbnb, a website on which private owners offer rooms and flats for short-term rent, is disrupting the hotel industry. And Uber, a service that connects would-be passengers with drivers, is doing the same for the taxi business.

So instead of outlining what these startups do, this special report will explain how they operate, how they are nurtured in accelerators and other such organisations, how they are financed and how they collaborate with others. It is a story of technological change creating a set of new institutions which governments around the world are increasingly supporting. 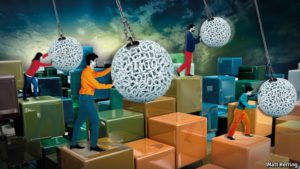 Startups run on hype; things are always “awesome” and people “super-excited”. But this world has its dark side as well. Failure can be devastating. Being an entrepreneur often means having no private life, getting little sleep and living on noodles, which may be one reason why few women are interested. More ominously, startups may destroy more jobs than they create, at least in the shorter term.

Полную версию статьи читайте на сайте The economist
или у нас на занятиях
The EconomistанглийскийНаукаТехнологии
Заказать звонок
+
Жду звонка!
Privacy Settings
We use cookies to enhance your experience while using our website. If you are using our Services via a browser you can restrict, block or remove cookies through your web browser settings. We also use content and scripts from third parties that may use tracking technologies. You can selectively provide your consent below to allow such third party embeds. For complete information about the cookies we use, data we collect and how we process them, please check our Privacy Policy
Youtube
Consent to display content from Youtube
Vimeo
Consent to display content from Vimeo
Google Maps
Consent to display content from Google
Save