The real wealth of Nations

“WEALTH is not without its advantages,” John Kenneth Galbraith once wrote, “and the case to the contrary, although it has often been made, has never proved widely persuasive.” Despite the obvious advantages of wealth, nations do a poor job of keeping count of their own. They may boast about their abundant natural resources, their skilled workforce and their world-class infrastructure. But there is no widely recognised, monetary measure that sums up this stock of natural, human and physical assets.

Economists usually settle instead for GDP. But that is a measure of income, not wealth. It values a flow of goods and services, not a stock of assets. Gauging an economy by its GDP is like judging a company by its quarterly profits, without ever peeking at its balance-sheet. Happily, the United Nations this month published balance-sheets for 20 nations in a report overseen by Sir Partha Dasgupta of Cambridge University. They included three kinds of asset: “manufactured”, or physical, capital (machinery, buildings, infrastructure and so on); human capital (the population’s education and skills); and natural capital (including land, forests, fossil fuels and minerals).

By this gauge, America’s wealth amounted to almost $118 trillion in 2008, over ten times its GDP that year. (These amounts are calculated at the prices prevailing in 2000.) Its wealth per person was, however, lower than Japan’s, which tops the league on this measure. Judged by GDP, Japan’s economy is now smaller than China’s. But according to the UN, Japan was almost 2.8 times wealthier than China in 2008 (see charts). 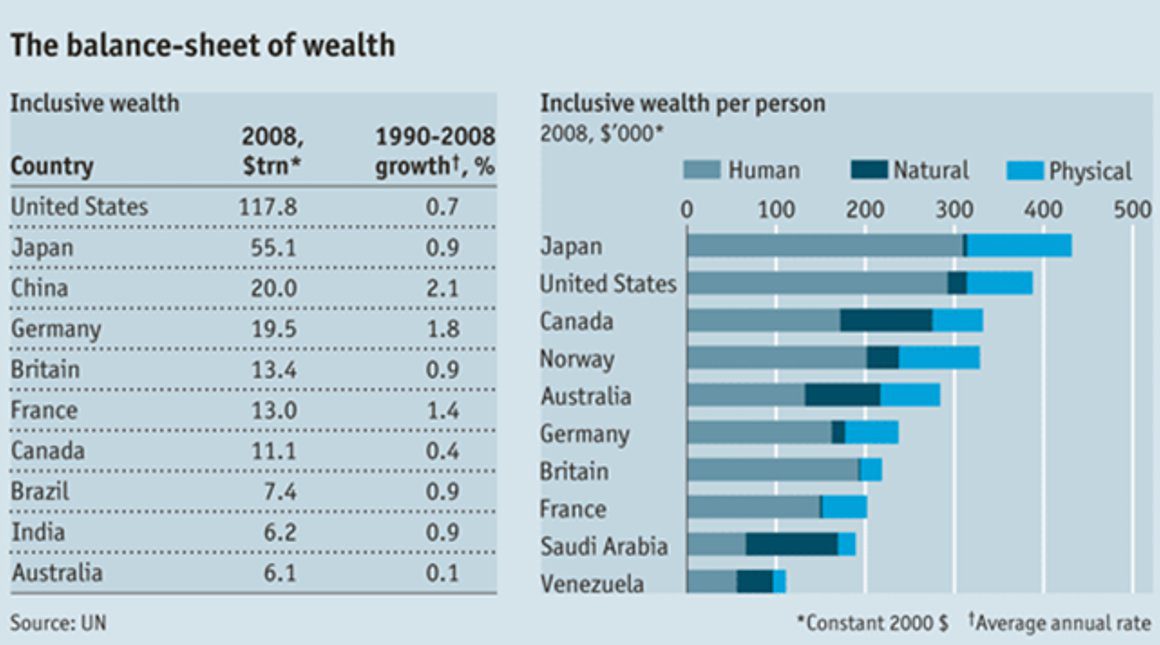 Officials often say that their country’s biggest asset is their people. For all of the countries in the report except Nigeria, Russia and Saudi Arabia, this turns out to be true. The UN calculates a population’s human capital based on its average years of schooling, the wage its workers can command and the number of years they can expect to work before they retire (or die). Human capital represents 88% of Britain’s wealth and 75% of America’s. The average Japanese has more human capital than anyone else.

Japan is also one of only three countries in the report that did not deplete their natural capital between 1990 and 2008. All of the countries except Russia nonetheless increased their wealth, accumulating enough other assets to offset the erosion of their natural patrimony. In 14 of the 20 countries studied, these increases in wealth outpaced the growth of their population, leaving per-person wealth higher in 2008 than in 1990. Germany, for example, increased its human capital by over 50%. China expanded its “manufactured” capital by an extraordinary 540%.

By putting a dollar value on everything from bauxite to brainpower, the UN’s exercise makes all three kinds of capital comparable and commensurable. It also implies that they are substitutable. A country can lose $100 billion-worth of pastureland, gain $100 billion-worth of skills and be no worse off than before. The framework turns economic policymaking into an “asset-management problem”, says Sir Partha.

A country like Saudi Arabia, for example, depleted its stock of fossil fuels by $37 billion between 1990 and 2008, while adding to its stock of school-leavers and university graduates (its human capital grew by almost $1 trillion). In some richer countries, however, investments in human capital appear to have hit diminishing returns, the report argues. Perhaps governments should redirect their investment into natural capital instead, restocking their forests rather than their libraries.

The idea that natural assets are substitutable makes some environmentalists (including some contributors to the report) nervous. Many of the services the environment provides, like clean water and air, are irreplaceable necessities, they point out. In theory, however, the undoubted value of these natural treasures should be reflected in their price, which should rise steeply as they become more scarce. A good asset manager will then husband them carefully, knowing that it will take an ever-increasing amount of human or physical capital to make up for further losses of the natural kind.

In practice, however, natural assets are often hard to price well or at all. As a consequence, the UN report has to steer clear of assets like clean air that cannot be directly owned, bought or sold. It confines itself to resources like gas, nickel and timber, for which market prices exist. But even these market prices may not reflect a commodity’s true social value. Beekeeping is one example beloved by economic theorists. Bees create honey, which can be sold on the market. But they also pollinate nearby apple trees, a useful service that is not purchased or priced.

Полную версию статьи читайте на сайте The economist
или у нас на занятиях
The EconomistанглийскийФинансыЭкономика
Заказать звонок
+
Жду звонка!
Privacy Settings
We use cookies to enhance your experience while using our website. If you are using our Services via a browser you can restrict, block or remove cookies through your web browser settings. We also use content and scripts from third parties that may use tracking technologies. You can selectively provide your consent below to allow such third party embeds. For complete information about the cookies we use, data we collect and how we process them, please check our Privacy Policy
Youtube
Consent to display content from Youtube
Vimeo
Consent to display content from Vimeo
Google Maps
Consent to display content from Google
Save